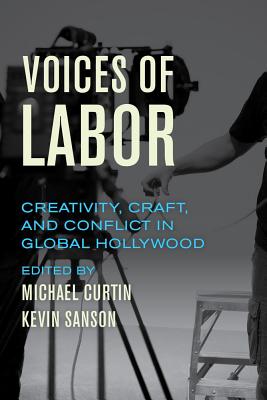 Voices of Labor: Creativity, Craft, and Conflict in Global Hollywood

Motion pictures are made, not mass produced, requiring a remarkable collection of skills, self-discipline, and sociality--all of which are sources of enormous pride among Hollywood's craft and creative workers. The interviews collected here showcase the ingenuity, enthusiasm, and aesthetic pleasures that attract people to careers in the film and television industries. They also reflect critically on changes in the workplace brought about by corporate conglomeration and globalization. Rather than offer publicity-friendly anecdotes by marquee celebrities, Voices of Labor presents off-screen observations about the everyday realities of Global Hollywood. Ranging across job categories--from showrunner to make-up artist to location manager--this collection features voices of labor from Los Angeles, Atlanta, Prague, and Vancouver. Together they show how seemingly abstract concepts like conglomeration, financialization, and globalization are crucial tools for understanding contemporary Hollywood and for reflecting more generally on changes and challenges in the screen media workplace and our culture at large. Despite such formidable concerns, what nevertheless shines through is a commitment to craftwork and collaboration that provides the means to imagine and instigate future alternatives for screen media labor.
Voices of Labor: Creativity, Craft, and Conflict in Global Hollywood

Michael Curtin is the Duncan and Suzanne Mellichamp Distinguished Professor of Film and Media Studies with affiliated appointments in Global Studies and East Asian Languages and Cultural Studies.

He has also held teaching or research appointments at Northwestern University, Renmin University, the Chinese University of Hong Kong, the Institute of Ethnology at Academia Sinica, and the Center for the Humanities at Wesleyan University. Curtin’s research and teaching focus on media globalization, cultural geography, industry and policy studies, and creative labor.

Curtin is currently at work on Media Capital: The Cultural Geography of Globalization. He is executive editor of global-e, and co-editor of Media Industries and the British Film Institute’s International Screen Industries book series.