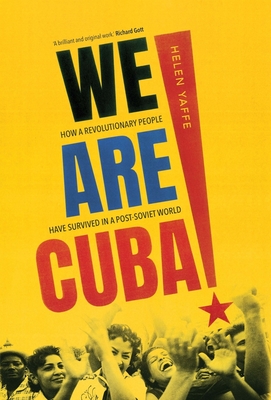 We Are Cuba!: How a Revolutionary People Have Survived in a Post-Soviet World

In the aftermath of the fall of the Soviet Union, Cuba faced the start of a crisis that decimated its economy. Helen Yaffe examines the astonishing developments that took place during and beyond this period. Drawing on archival research and interviews with Cuban leaders, thinkers, and activists, this book tells for the first time the remarkable story of how Cuba survived while the rest of the Soviet bloc crumbled.

Yaffe shows how Cuba has been gradually introducing select market reforms. While the government claims that these are necessary to sustain its socialist system, many others believe they herald a return to capitalism. Examining key domestic initiatives including the creation of one of the world's leading biotechnological industries, its energy revolution, and medical internationalism alongside recent economic reforms, Yaffe shows why the revolution will continue post-Castro.

This is a fresh, compelling account of Cuba's socialist revolution and the challenges it faces today.

We Are Cuba!: How a Revolutionary People Have Survived in a Post-Soviet World

I joined the University of Glasgow as Lecturer in Economic and Social History in January 2018 after previously teaching in Economic History at the London School of Economics, in History at the University College London and in Development Studies at Birkbeck, University of London. My teaching focuses on Latin American and Cuban development. At the LSE, I taught the history of economics and the political economy of late development. In 2011, I joined the Geography Department at the University of Leicester as a Research Associate to work with Professor Gavin Brown on the Leverhulme-funded project Non-Stop Against Apartheid: the spaces of transnational solidarity. The project examined the history and geography of the Non-Stop Picket maintained between 1986 and 1990 by the City of London Anti-Apartheid Group outside the South African Embassy in Trafalgar Square opposing apartheid and calling for the release of Nelson Mandela.  Our book, Youth Activism and Solidarity: The Non-stop Picket Against Apartheid, was published in 2017.

Since 1995 (as a teenager), I have spent time living and researching in Cuba. My doctoral thesis, undertaken at the LSE, was adapted for publication as Che Guevara: The Economics of Revolution by Palgrave Macmillan in 2009. I have continued to research and publish on Cuban development. My new book We Are Cuba! How a Revolutionary People Have Survived in a Post-Soviet World, is due for publication by Yale University Press in February 2020.