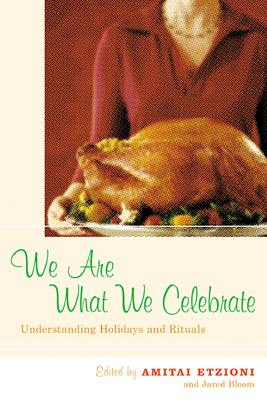 We Are What We Celebrate: Understanding Holidays and Rituals

How did Martin Luther King Jr.'s birthday become a national holiday? Why do we exchange presents on Christmas and Chanukah? What do bunnies have to do with Easter? How did Earth Day become a global holiday? These questions and more are answered in this fascinating exploration into the history and meaning of holidays and rituals. Edited by Amitai Etzioni, one of the most influential social and political thinkers of our time, this collection provides a compelling overview of the impact that holidays and rituals have on our family and communal life.
From community solidarity to ethnic relations to religious traditions, We Are What We Celebrate argues that holidays such as Halloween, Fourth of July, Thanksgiving, New Year's Eve, and Valentine's Day play an important role in reinforcing, and sometimes redefining, our values as a society. The collection brings together classic and original essays that, for the first time, offer a comprehensive overview and analysis of the important role such celebrations play in maintaining a moral order as well as in cementing family bonds, building community relations and creating national identity. The essays cover such topics as the creation of Thanksgiving as a national holiday; the importance of holidays for children; the mainstreaming of Kwanzaa; and the controversy over Columbus Day celebrations.
Compelling and often surprising, this look at holidays and rituals brings new meaning to not just the ways we celebrate but to what those celebrations tell us about ourselves and our communities.
Contributors: Theodore Caplow, Gary Cross, Matthew Dennis, Amitai Etzioni, John R. Gillis, Ellen M. Litwicki, Diana Muir, Francesca Polletta, Elizabeth H. Pleck, David E. Proctor, Mary F. Whiteside, and Anna Day Wilde.

We Are What We Celebrate: Understanding Holidays and Rituals