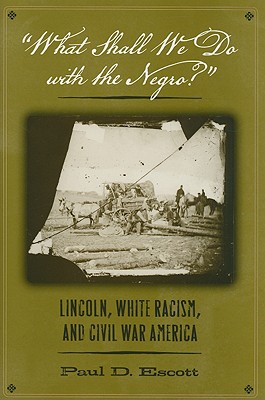 What Shall We Do with the Negro?: Lincoln, White Racism, and Civil War America

Throughout the Civil War, newspaper headlines and stories repeatedly asked some variation of the question posed by the New York Times in 1862, What shall we do with the negro? The future status of African Americans was a pressing issue for those in both the North and in the South. Consulting a broad range of contemporary newspapers, magazines, books, army records, government documents, publications of citizens' organizations, letters, diaries, and other sources, Paul D. Escott examines the attitudes and actions of Northerners and Southerners regarding the future of African Americans after the end of slavery. What Shall We Do with the Negro? demonstrates how historians together with our larger national popular culture have wrenched the history of this period from its context in order to portray key figures as heroes or exemplars of national virtue.

Escott gives especial critical attention to Abraham Lincoln. Since the civil rights movement, many popular books have treated Lincoln as an icon, a mythical leader with thoroughly modern views on all aspects of race. But, focusing on Lincoln's policies rather than attempting to divine Lincoln's intentions from his often ambiguous or cryptic statements, Escott reveals a president who placed a higher priority on reunion than on emancipation, who showed an enduring respect for states' rights, who assumed that the social status of African Americans would change very slowly in freedom, and who offered major incentives to white Southerners at the expense of the interests of blacks.Escott's approach reveals the depth of slavery's influence on society and the pervasiveness of assumptions of white supremacy. What Shall We Do with the Negro? serves as a corrective in offering a more realistic, more nuanced, and less celebratory approach to understanding this crucial period in American history.

What Shall We Do with the Negro?: Lincoln, White Racism, and Civil War America