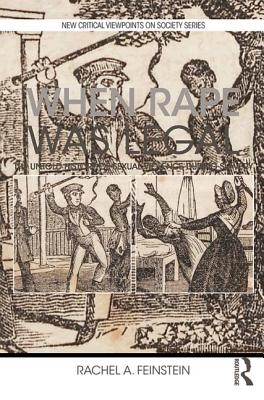 When Rape Was Legal: The Untold History of Sexual Violence During Slavery

When Rape Was Legal: The Untold History of Sexual Violence During Slavery

Rachel Feinstein received her Ph.D. in Sociology from Texas A&M University in 2014. Her areas of specialization are Criminology and Race and Ethnicity with a Women's and Gender Studies Certification. After graduating, Rachel taught for three years as an Assistant Professor at Carthage College in Wisconsin before moving to California. She loves teaching a variety of sociology classes here at California State University Fullerton, including- Theories of Social Behavior, Gender, Sex and Society, Criminology, among others.

Her research involves analyzing archival data to study sexual violence during slavery using an intersectional perspective, which can be found in her book When Rape was Legal: The Untold Story of Sexual Violence during Slavery (2018). She has also conducted in-depth interviews with incarcerated youth to explore their experiences with the justice system, and is currently analyzing the way incarcerated women and mothers are portrayed by the media and perceived by the public.