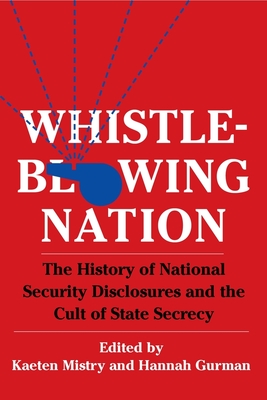 Whistleblowing Nation: The History of National Security Disclosures and the Cult of State Secrecy

The twenty-first century witnessed a new age of whistleblowing in the United States. Disclosures by Chelsea Manning, Edward Snowden, and others have stoked heated public debates about the ethics of exposing institutional secrets, with roots in a longer history of state insiders revealing privileged information. Bringing together contributors from a range of disciplines to consider political, legal, and cultural dimensions, Whistleblowing Nation is a pathbreaking history of national security disclosures and state secrecy from World War I to the present. The contributors explore the complex politics, motives, and ideologies behind the revelation of state secrets that threaten the status quo, challenging reductive characterizations of whistleblowers as heroes or traitors. They examine the dynamics of state retaliation, political backlash, and civic contests over the legitimacy and significance of the exposure and the whistleblower. The volume considers the growing power of the executive branch and its consequences for First Amendment rights, the protection and prosecution of whistleblowers, and the rise of vast classification and censorship regimes within the national-security state. Featuring analyses from leading historians, literary scholars, legal experts, and political scientists, Whistleblowing Nation sheds new light on the tension of secrecy and transparency, security and civil liberties, and the politics of truth and falsehood.
Whistleblowing Nation: The History of National Security Disclosures and the Cult of State Secrecy

I am a historian of the United States and the world.  My research and teaching interests lie in the forces shaping U.S. foreign relations, especially the interaction of national and transnational factors and domestic and foreign influences, in twentieth century international history.

I recently led a project on the history, politics, and culture of national security whistleblowing, which included co-editing Whistleblowing Nation: The History of National Security Disclosures and the Cult of Secrecy (Columbia University Press, 2020).  My first book was The United States, Italy, and the Origins of Cold War: Waging Political Warfare (Cambridge University Press, 2014) and I guest edited a special issue on U.S. foreign relations, intelligence, and international history for Intelligence and National Security (2011).  My articles have appeared in journals including Diplomatic History, Cold War History, Modern Italy, and Journal of American History.  In addition to my scholarly work, my writing has appeared in Foreign Policy in Focus, Process, The Conversation, and Washington Post.

Current research includes projects on the culture of secrecy, anti-imperial whistleblowing, and the regulation of speech rights.

I am happy to supervise research students working on the U.S. and the world; the international and transnational cold war; U.S. foreign relations history; protest and dissent; intelligence and cultures of secrecy; and modern Italy.

Key Research Interests and Expertise
I recently completed a research project examining the long history of U.S. national security whistleblowing.  It explored the political, legal, cultural, and social dimensions of disclosures in the public interest and state secrecy from World War I to the present.  The project, supported by the AHRC, considered these issues in relation to the mechanics of state secrets, the scope of executive power, the dynamics of state retaliation, First Amendment rights, and the contested legitimacy of whistleblowing.  I co-edited (with Hannah Gurman) Whistleblowing Nation: The History of National Security Disclosures and the Cult of Secrecy, which was published by Columbia University Press in 2020.  Other publications appeared in Journal of American History, Foreign Policy in Focus, and Washington Post.

My first book, The United States, Italy, and the Origins of Cold War: Waging Political Warfare, was published by Cambridge University Press (hb 2014, pb 2016).  It examined the origins of “cold war” through the multi-faceted U.S.-Italian relationship and American attempts at waging a war “short of war.”  Analysing the alliance between elites in Rome and Washington, alongside an increasingly prominent transnational network of business, labour, and religious protagonists, it explored the U.S. embrace of political warfare against the Italian left.  The struggle supposedly offered a blueprint for defeating communism around the world.  I’ve discussed the book in interviews with fifteen eighty-four and New Books Network.

I have also examined the intellectual and cultural struggle to shape understanding of American interventionism.  Analysing public debates around U.S. foreign relations and covert activities since World War II, the project considered the multiple, conflicting narratives of politicians, spies, journalists, scholars, and activists.  Supported by the Leverhulme Trust, it resulted in a dual special issue of Intelligence and National Security that I guest edited.

Current research plans include a book on the culture of secrecy; a study of Philip Agee, the former CIA covert operations case officer turned whistleblower; and the regulation of speech rights of government employees.