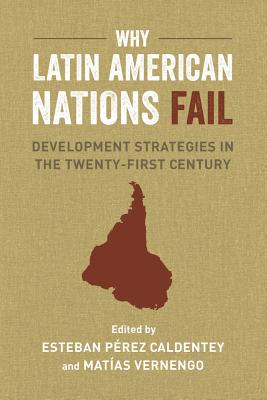 The question of development is a major topic in courses across the social sciences and history, particularly those focused on Latin America. Many scholars and instructors have tried to pinpoint, explain, and define the problem of underdevelopment in the region. With new ideas have come new strategies that by and large have failed to explain or reduce income disparity and relieve poverty in the region. Why Latin American Nations Fail brings together leading Latin Americanists from several disciplines to address the topic of how and why contemporary development strategies have failed to curb rampant poverty and underdevelopment throughout the region. Given the dramatic political turns in contemporary Latin America, this book offers a much-needed explanation and analysis of the factors that are key to making sense of development today.
Why Latin American Nations Fail: Development Strategies in the Twenty-First Century

Matias Vernengo is Professor of Economics at the Bucknell University.

Matías Vernengo was, before coming to Bucknell, Associate Professor of Economics at the University of Utah, and former Senior Manager of Economic Research at the Central Bank of Argentina. He has also taught at Kalamazoo College, and the Universidade Federal do Rio de Janeiro, Universidad Nacional de San Martin was a Visiting Lecturer at the Université de Bourgogne, and acted as external consultant for the International Labor Office (ILO), United Nations Development Program (UNDP), the Economic Commission for Latin America and the Caribbean (ECLAC), and the United Nations Conference on Trade and Development (UNCTAD).

Dr. Vernengo has co-authored one book, edited four books and published over fifty academic and popular articles, and contributes to the blogs Naked Keynesianism and Triple Crisis. He is also the co-editor of the Review of Keynesian Economics (ROKE).

His methodological view emphasizes the importance of the history of ideas for the development of economic theory, and is based on the surplus approach of the classical political economy authors and Marx, as reinterpreted by Sraffa, and the heterodox followers of Keynes, like Kalecki and Kaldor. He has written on the effects of external liberalization in Latin America and alternatives to the Washington Consensus, on the international role of dollar, on current monetary and fiscal policy, on macroeconomic policy during the 1930s, on the history of economic ideas, and on several other topics. He has also published in the popular press in The Guardian, Dissent, Dollars & Sense, Challenge, and in newspapers in Latin America like Página/12, O Globo, and Valor Econômico.