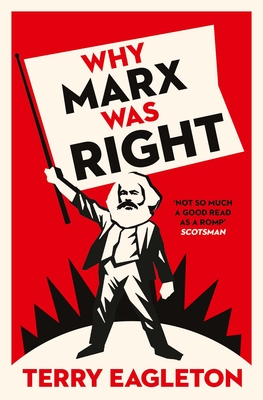 Why Marx Was Right

Reading a book by Terry Eagleton is like watching fireworks.--Dennis O'Brien, Christian Century

[Eagleton is] a witty, insightful thinker with a penchant for glib asides and wry dashes of humor. It's probably the only book that makes references to Tiger Woods and Mel Gibson along with Charles Fourier and Michel Foucault.--Michael Patrick Brady, PopMatters

In this combative, controversial book, Terry Eagleton takes issue with the prejudice that Marxism is dead and done with. Taking ten of the most common objections to Marxism--that it leads to political tyranny, that it reduces everything to the economic, that it is a form of historical determinism, and so on--he demonstrates in each case what a woeful travesty of Marx's own thought these assumptions are. In a world in which capitalism has been shaken to its roots by some major crises, Why Marx Was Right is as urgent and timely as it is brave and candid. Written with Eagleton's familiar wit, humor, and clarity, it will attract an audience far beyond the confines of academia.

Why Marx Was Right

Professor Eagleton, who has written around fifty books and is himself the subject of at least two monographs, is one of the world’s leading literary critics and, according to The Independent, ‘the man who succeeded F. R. Leavis as Britain's most influential academic critic.’ Prior to his move to Lancaster in 2008 Professor Eagleton was John Edward Taylor Professor of English Literature at the University of Manchester (2001-2008) and before that Thomas Warton Professor of English Literature at the University of Oxford (1992-2001). Professor Eagleton is a Fellow of both the British Academy and the English Association, and has held visiting appointments at such universities as Cornell, Duke, Iowa, Melbourne, Notre Dame, Trinity College Dublin, and Yale.

Eagleton obtained his PhD at Cambridge where he was a student of the famous left-wing literary critic Raymond Williams. He then became a Fellow of Jesus College, Cambridge, the youngest fellow since the eighteenth century, before moving to Wadham College, Oxford in 1968. At this early point in his career Eagleton was a Victorianist but he was always drawn to write on a wide range of periods – among his first books were Shakespeare and Society (1967) and Exiles and Emigrés: Studies in Modern Literature (1970). It was, though, his more theoretical work as a Marxist critic, in such books as Criticism and Ideology (1976), which really established him as a leading figure within literary studies.

In the 1980s, Eagleton engaged extensively with the various tides of continental thought that were impacting upon English Literature and he did so most famously in his book Literary Theory (1983) which remains to this day an academic best-seller. Eagleton’s specifically Marxist take on literary theory is evident throughout this book and clearly informs his continuing work on ideology, most famously The Ideology of the Aesthetic (1990), and his critique of the postmodern turn in cultural theory, witness The Illusions of Postmodernism (1996), and indeed his more recent work - see Why Marx Was Right (2011).

Alongside his theoretical and critical work, Eagleton was, at this time, also developing a creative dimension to his work; this led to the well-reviewed novel Saints and Scholars (1987), several widely-performed plays such as Saint Oscar (1989), the screen-play for Derek Jarman’s film Wittgenstein (1993), and indeed a best-selling memoir, The Gatekeeper (2001). Well to the fore in much of this creative work is Eagleton’s Irish ancestry and his keen interest in the political history of Ireland, an interest which is also evident in such critical work as Heathcliff and the Great Hunger (1995) and Crazy John and the Bishop (1998).

Eagleton’s Irishness connects with a Catholicism which is evident not only in very early books like The New Left Church (1966) but also such recent works as Sweet Violence (2003), Holy Terror (2005), and Trouble with Strangers (2008). These books have played a part in Eagleton’s development as a public intellectual, a role he takes on, for example, in The Meaning of Life (2007), a series of lectures delivered at Yale University in 2008 since published as Reason, Faith, and Revolution, and indeed his 2013 book,Across the Pond: An Englishman's View of America.