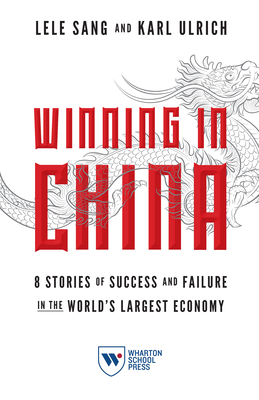 Winning in China: 8 Stories of Success and Failure in the World's Largest Economy

If Amazon can't win in China, can anyone?

When Amazon CEO Jeff Bezos visited China in 2007, he expected that one day soon China would be a double-digit percentage of Amazon's sales. Yet, by 2019, Amazon, the most powerful and successful ecommerce company in the world, had quit China.

In Winning in China: 8 Stories of Success and Failure in the World's Largest Economy, Wharton experts Lele Sang and Karl Ulrich explore the success and failure of several well-known companies, including Hyundai, LinkedIn, Sequoia Capital, and InMobi, as more and more businesses look to reap profits from the demand of 1.4 billion people.

Winning in China: 8 Stories of Success and Failure in the World's Largest Economy

Lele Sang is Global Fellow at the Wharton School of the University of Pennsylvania. A former journalist and editor, she has worked for the Beijing News and Caijing Magazine covering business and politics and has interviewed world leaders from prime ministers to Fortune 500 company CEOs. She also worked at startups and multinational corporations in both the United States and China.

She is coauthor with Karl Ulrich of Winning in China. She was a visiting scholar at University of California–Berkeley, Graduate School of Journalism. She holds an MPA degree from the University of Pennsylvania.