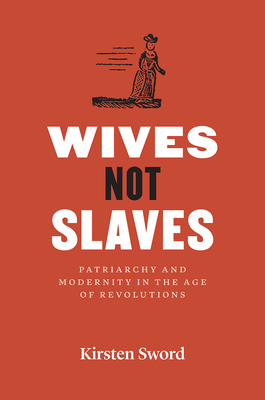 Wives Not Slaves: Patriarchy and Modernity in the Age of Revolutions

Wives not Slaves begins with the story of John and Eunice Davis, a colonial American couple who, in 1762, advertised their marital difficulties in the New Hampshire Gazette--a more common practice for the time and place than contemporary readers might think. John Davis began the exchange after Eunice left him, with a notice resembling the ads about runaway slaves and servants that were a common feature of eighteenth-century newspapers. John warned neighbors against entertaining her or harbouring her. . . or giving her credit. Eunice defiantly replied, If I am your wife, I am not your slave. With this pointed but problematic analogy, Eunice connected her individual challenge to her husband's authority with the broader critiques of patriarchal power found in the politics, religion, and literature of the British Atlantic world.

Kirsten Sword's richly researched history reconstructs the stories of wives who fled their husbands between the mid-seventeenth and early nineteenth centuries, comparing their plight with that of other runaway dependents. Wives not Slaves explores the links between local justice, the emerging press, and transatlantic political debates about marriage, slavery and imperial power. Sword traces the relationship between the distress of ordinary households, domestic unrest, and political unrest, shedding new light on the social changes imagined by eighteenth-century revolutionaries, and on the politics that determined which patriarchal forms and customs the new American nation would--and would not--abolish.

Wives Not Slaves: Patriarchy and Modernity in the Age of Revolutions

Kirsten Sword is an assistant professor in the Department of History; she is an historian of early America in the Atlantic age of revolutions, with particular interests in gender, race and the law. Her central intellectual concern is with the transformation of early modern household relations of dependence from assumed and accepted ways of ordering society into social and political problems.

Her IDAH project, Mapping Antislavery, is a geospatial database that tracks Quaker networks, itinerant people of color, antislavery propaganda, and courtroom challenges to slavery during the late eighteenth and early nineteenth-centuries.

The project maps long-hidden connections among antislavery activists and events, offering fresh perspectives on the rise of antislavery that hold broad significance for multi-disciplinary debates about emergence of humanitarian social movements. She will be developing a database structure that can be integrated with open-source geographic systems to generate maps and other tools for visualizing historical data.

The technical aim is to create a prototype for larger databases that will facilitate collaborative and cumulative social historical research.