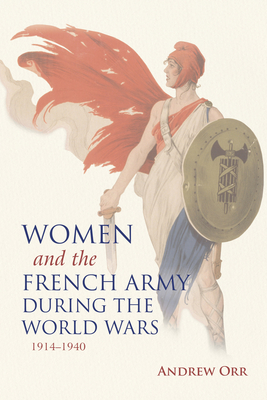 How did women contribute to the French Army in the World Wars? Drawing on myriad sources, historian Andrew Orr examines the roles and value of the many French women who have been overlooked by historians--those who worked as civilians supporting the military. During the First World War, most officers expected that the end of the war would see a return to prewar conditions, so they tolerated women in supporting roles. But soon after the November 1918 armistice, the French Army fired more than half its female employees. Demobilization created unexpected administrative demands that led to the next rehiring of many women. The army's female workforce grew slowly and unevenly until 1938 when preparations for war led to another hiring wave; however, officers resisted all efforts to allow women to enlist as soldiers and alternately opposed and ignored proposals to recognize them as long-term employees. Orr's work offers a critical look at the indispensable wartime roles filled by women behind the lines.

Andrew Orr is a specialist in modern military history. He received his B.A. from Claremont Mckenna College and his M.A. and Ph.D. from the University of Notre Dame. His work focuses on the 19th and 20th centuries and explores the boundaries of civilian and military identity. His first book, Women and the French Army 1914-1904, studied women’s roles in the French military and civil-military relations in France during the era of the world wars.

Dr. Orr has published on intelligence operations in the Middle East, imperialism, civil-military relations, and the history of French Communist Party. His current projects include a book on French involvement in the Turkish War of Independence and a cultural history of the military in American life since 1973.