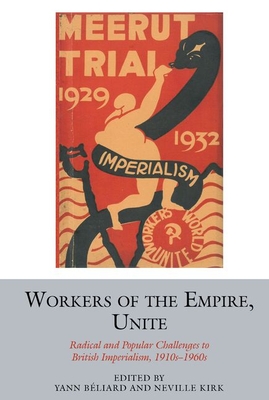 Workers of the Empire, Unite: Radical and Popular Challenges to British Imperialism, 1910s-1960s

In most studies of British decolonisation, the world of labour is neglected, the key roles being allocated to metropolitan statesmen and native elites. Instead this volume focuses on the role played by working people, their experiences, initiatives and organisations, in the dissolution of the British Empire, both in the metropole and in the colonies. How central was the intervention of the metropolitan Left in the liquidation of the British Empire? Were labour mobilisations in the colonies only stepping stones for bourgeois nationalists? To what extent were British labour activists willing and able to form connections with colonial workers, and vice versa? Here are some of the complex questions on which this volume sheds new light. Though convergences were fragile and temporary, this book recapture the sense of uncertainty that accompanied the final decades of the British Empire, a period when radical minorities hoped that coordinated efforts across borders might lead not only to the destruction of the British Empire but to that of capitalism and imperialism in general. Exploiting rare primary sources and adopting a resolutely transnational approach, our collection makes an original contribution to both labour history and imperial studies.
Workers of the Empire, Unite: Radical and Popular Challenges to British Imperialism, 1910s-1960s

Yann Béliard is a Senior Lecturer in British studies at the Sorbonne Nouvelle University, France. His PhD, completed in 2007 under the supervision of the late François Poirier, dealt with class relations in Hull from 1894 to 1910. Since then he has edited a special issue of the Labour History Review (April 2014) revisiting ‘The Great Labour Unrest, 1911-1914’.

His research focuses on British labour in the age of empire, with particular emphasis on workplace struggles, transnational activism, and race. Recently he has explored more particularly Sylvia Pankhurst’s Workers’ Dreadnought years and produced a series of notices for the Dictionary of Labour Biography. He is currently working on the edition of a collective volume on British labour and decolonisation.