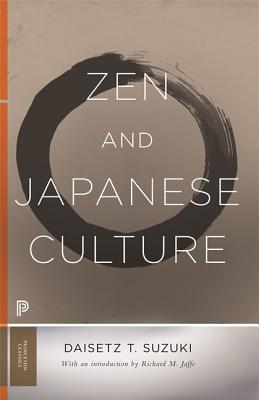 Zen and Japanese Culture is a classic that has influenced generations of readers and played a major role in shaping conceptions of Zen's influence on Japanese traditional arts. In simple and poetic language, Daisetz Suzuki describes Zen and its historical evolution. He connects Zen to the philosophy of the samurai, and subtly portrays the relationship between Zen and swordsmanship, haiku, tea ceremonies, and the Japanese love of nature. Suzuki uses anecdotes, poetry, and illustrations of silk screens, calligraphy, and architecture. The book features an introduction by Richard Jaffe that acquaints readers with Suzuki's life and career and analyzes the book's reception in light of contemporary criticism, especially by scholars of Japanese Buddhism. Zen and Japanese Culture is a valuable source for those wishing to understand Zen in the context of Japanese life and art, and remains one of the leading works on the subject.
Zen and Japanese Culture

Daisetz Teitaro Suzuki (1870-1966) was a Japanese translator, teacher, and constructive interpreter of Zen Buddhist thought to the West.

Choosing belief over doubt has profound, eternal consequences for practicing Christians, while for religious Jews and Moslems alike, faith in God is the cornerstone of righteousness. Yet elsewhere in the world, revered spiritual traditions exist in which the struggle between belief and unbelief is of little importance. Daisetz Teitaro Suzuki is an eloquent international spokesman for one of these traditions: the Japanese variant of Buddhism known as Zen.

A widely traveled Japanese scholar, Suzuki taught in that country's university system, translated several Eastern philosophical works into English, and corresponded widely with Christian contemplatives such as Thomas Merton. Through his books and lectures, Suzuki became Zen's leading voice in America during the mid-20th century. His Introduction to Zen Buddhism, published in 1956, not only offers an overview of the historical background of Zen philosophy and practice, but succeeds in conveying something of its seemingly inexpressible essence.