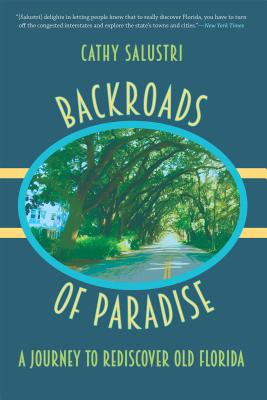 Backroads of Paradise: A Journey to Rediscover Old Florida

In the 1930s, the Federal Writers' Project sent mostly anonymous writers, but also Zora Neale Hurston and Stetson Kennedy, into the depths of Florida to reveal its splendor to the world. The FWP and the State of Florida jointly published the results as Florida: A Guide to the Southernmost State, which included twenty-two driving tours of the state's main roads. Eventually, after Eisenhower built the interstates, drivers bypassed the small towns that thrived along these roads in favor of making better time. Those main roads are now the state's backroads--forgotten by all but local residents, a few commuters, and dedicated road-trippers. Retracing the original routes in the Guide, Cathy Salustri rekindles our notions of paradise by bringing a modern eye to the historic travelogues.

Salustri's 5,000-mile road trip reveals a patchwork quilt of Florida cultures: startling pockets of history and environmental bliss stitched against the blight of strip malls and franchise restaurants. The journey begins on US 98, heading west toward the Florida/Alabama state line, where coastal towns dot the roadway. Here, locals depend on the tourism industry, spurred by sugar sand beaches, as well as the abundance of local seafood. On US 41, Salustri takes us past the state's only whitewater rapids, a retired carnie town, and a dazzling array of springs, swamps, and rivers interspersed with farms that produce a bounty of fruit. Along US 17, she stops for milkshakes and hamburgers at Florida's oldest diner and visits a collection of springs interconnected by underwater mazes tumbling through white spongy limestone, before stopping in Arcadia, where men still bring cattle to auction. Desperately searching for skunk apes, the Sunshine State's version of Bigfoot, she encounters more than one gator on her way through the Everglades, Ochopee, and the Skunk Ape Research Headquarters.

Following the original Guide, Salustri crisscrosses the state from the panhandle to the Keys. She guides readers through forgotten and unknown corners of the state--nude beaches, a rattlesnake cannery, Devil's Millhopper in Gainesville--as well as more familiar haunts--Kennedy Space Center and The Villages, Florida's Friendliest Retirement Hometown. Woven through these journeys are nuggets of history, environmental debates about Florida's future, and a narrative that combines humor with a strong affection for an oft-maligned state.

Today, Salustri urges, tourists need a new nudge to get off the interstates or away from Disney in order to discover the real Florida. Her travel narrative, following what are now backroads and scenic routes, guides armchair travelers and road warriors alike to historic sites, natural wonders, and notable man-made attractions--comparing the past views with the present landscape and commenting on the changes, some barely noticeable, others extreme, along the way.

Backroads of Paradise: A Journey to Rediscover Old Florida

Cathy Salustri works out of Gulfport, Florida, travels across Florida on foot, bike, boat, or car to places the Interstate bypassed long ago, as well as those spots where natural beauty has survived the onslaught of overpopulation. She attended the University of Central Florida, and earned her undergraduate degree at the University of Tampa finding the Florida Studies MLA program at the University of South Florida St. Petersburg. Cathy has written travel pieces for USA Today, Visit Florida, regional magazines and local press. You can find all her travel writing at the greatfloridaroadtrip.com.

Under the guidance of Florida scholar and writer Gary Mormino, Cathy wrote what she calls “possibly the least academic master’s thesis ever,” logging almost 5,000 miles retracing driving tours from the WPA Federal Writer’s Project Guide to the Southernmost State in search of Florida’s forgotten destinations. That work became Backroads of Paradise, a travel narrative about her journeys along Florida’s backroads, published by the University Press of Florida in 2016. In 2017, Cathy and her book appeared in the New York Times.

Cathy started freelancing after quitting a government job in a self-described “fit of self-respect” in 2003. Except for a brief few years where she thought she might be suited for office work and thusly took the arts & entertainment editor post at Creative Loafing Tampa, she’s freelanced since then. Her freelance work included 12 years at The Gabber Newspaper, where she covered hyperlocal news. During her tenure at the Gabber, she penned an opinion column, Hard Candy, and wrote a monthly in-state travel piece. For fun (and profit) she attended local city council meetings and aggravated elected and appointed officials.

Cathy’s working on a series of pulp fiction novels about a mythical Florida town, based partially on her time at The Gabber.

Cathy speaks about Florida around the state and, close to home, at Eckerd College’s Osher Lifelong Learning Institute (OLLI). She also offers what she calls “casual photography” services for special and everyday events such as bridal showers, birthday parties, and other celebrations.