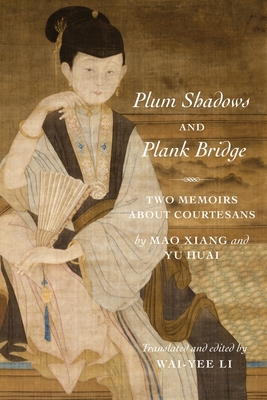 Amid the turmoil of the Ming-Qing dynastic transition in seventeenth-century China, some intellectuals sought refuge in romantic memories from what they perceived as cataclysmic events. This volume presents two memoirs by famous men of letters, Reminiscences of the Plum Shadows Convent by Mao Xiang (1611-93) and Miscellaneous Records of Plank Bridge by Yu Huai (1616-96), that recall times spent with courtesans. They evoke the courtesan world in the final decades of the Ming dynasty and the aftermath of its collapse.

Mao Xiang chronicles his relationship with the courtesan Dong Bai, who became his concubine two years before the Ming dynasty fell. His mournful remembrance of their life together, written shortly after her early death, includes harrowing descriptions of their wartime sufferings as well as idyllic depictions of romantic bliss. Yu Huai offers a group portrait of Nanjing courtesans, mixing personal memories with reported anecdotes. Writing fifty years after the fall of the Ming, he expresses a deep nostalgia for courtesan culture that bears the toll of individual loss and national calamity. Together, they shed light on the sensibilities of late Ming intellectuals: their recollections of refined pleasures and ruminations on the vagaries of memory coexist with political engagement and a belief in bearing witness. With an introduction and extensive annotations, Plum Shadows and Plank Bridge is a valuable source for the literature of remembrance, the representation of women, and the social role of intellectuals during a tumultuous period in Chinese history.

Her recent publications include The Readability of the Past in Early Chinese Historiography (Harvard, 2007), which investigates the ordering impulse of Chinese culture in understanding the past, as evinced by how different conceptions of rhetoric and exegesis determine interpretation; and Women and National Trauma in Late Imperial Chinese Literature (Harvard, 2014), which explores how history and literature intersect, how the multivalent presence of women in different genres mediates the experience and expression of political disorder during the seventeenth century Ming-Qing dynastic transition and beyond.

Li’s co-edited volume of translations of ten seminal plays from the 13th and 14th centuries, The Columbia Anthology of Yuan Drama, was also published in 2014.

Her annotated translation of Zuozhuan, in collaboration with Stephen Durrant and David Schaberg, was published in 2015, as was her co-authored book, Sima Qian and the Letter to Ren An. She is co-editing The Oxford Handbook of Classical Chinese Literature with Wiebke Denecke and Tian Xiaofei. Li has received fellowships or grants from the Harvard Society of Fellows, the Chiang Ching-kuo Foundation, ACLS, Radcliffe Institute of Advanced Study, and the American Academy in Berlin.

She has taught courses on Ming-Qing culture, early Chinese thought and historiography, gender and sexuality, and premodern fiction and drama.

In July of 2014, Li was elected by Academia Sinica to its List of Academicians.