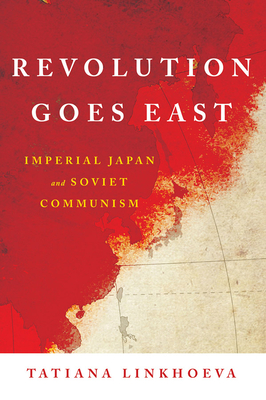 Revolution Goes East is an intellectual history that applies a novel global perspective to the classic story of the rise of communism and the various reactions it provoked in Imperial Japan. Tatiana Linkhoeva demonstrates how contemporary discussions of the Russian Revolution, its containment, and the issue of imperialism played a fundamental role in shaping Japan's imperial society and state.

In this bold approach, Linkhoeva explores attitudes toward the Soviet Union and the communist movement among the Japanese military and politicians, as well as interwar leftist and rightist intellectuals and activists. Her book draws on extensive research in both published and archival documents, including memoirs, newspaper and journal articles, political pamphlets, and Comintern archives. Revolution Goes East presents us with a compelling argument that the interwar Japanese Left replicated the Orientalist outlook of Marxism-Leninism in its relationship with the rest of Asia, and that this proved to be its undoing. Furthermore, Linkhoeva shows that Japanese imperial anticommunism was based on geopolitical interests for the stability of the empire rather than on fear of communist ideology.

Thanks to generous funding from New York University and its participation in TOME (Toward an Open Monograph Ecosystem), the ebook editions of this book are available as Open Access (OA) volumes from Cornell Open (cornellopen.org) and other repositories.

My research and teaching interests center on imperial Japan, collaboration and resistance, and social/ist imaginaries.

My book, Revolution Goes East. Imperial Japan and Soviet Communism, examined the impact of the Russian Revolution of 1917 on the Japanese Left and Japan's imperial policy. My second project is a comparative study of Japanese and Soviet empires and their colonial policies on the Mongolian territories.