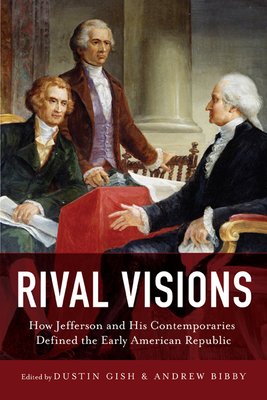 Rival Visions: How Jefferson and His Contemporaries Defined the Early American Republic

The emergence of the early American republic as a new nation on the world stage conjured rival visions in the eyes of leading statesmen at home and attentive observers abroad. Thomas Jefferson envisioned the newly independent states as a federation of republics united by common experience, mutual interest, and an adherence to principles of natural rights. His views on popular government and the American experiment in republicanism, and later the expansion of its empire of liberty, offered an influential account of the new nation. While persuasive in crucial respects, his vision of early America did not stand alone as an unrivaled model.

The contributors to Rival Visions examine how Jefferson's contemporaries--including Washington, Adams, Hamilton, Madison, and Marshall--articulated their visions for the early American republic. Even beyond America, in this age of successive revolutions and crises, foreign statesmen began to formulate their own accounts of the new nation, its character, and its future prospects. This volume reveals how these vigorous debates and competing rival visions defined the early American republic in the formative epoch after the revolution.

Rival Visions: How Jefferson and His Contemporaries Defined the Early American Republic

Dustin Gish has been a member of the Honors College faculty at the University of Houston since 2014, teaching the College’s signature course, the Human Situation, as well as courses in political theory. He is also the associate director of Phronêsis, an Honors minor and program in politics and ethics, and the faculty organizer of MindWalks: Honors@MFAH — a co-curricular program for students in the Human Situation course.

He held a residential fellowship at the International Center for Jefferson Studies and Jefferson Foundation Library at Monticello (2013).

Dr. Gish's most recent book is "Thomas Jefferson and the Science of Republican Government: A Political Biography of 'Notes on the State of Virginia'” (published by Cambridge University Press, 2017). He is also the contributing co-editor of five volumes: "The Quest for Excellence" (2016); "Resistance to Tyrants, Obedience to God: Reason, Religion, and Republicanism at the American Founding" (2013); "Shakespeare and the Body Politic" (2013); "Souls with Longing: Representations of Honor and Love in Shakespeare" (2011); and, "The Political Thought of Xenophon" (2009).

His research on Homer, Xenophon, Plato, Shakespeare, Jefferson, and the history of political thought has been published in numerous journal articles, book chapters, and review essays.