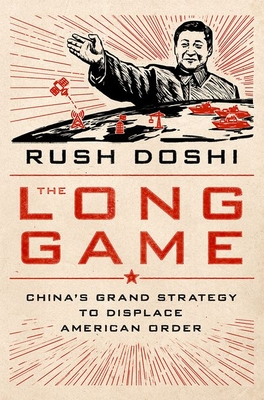 Drawing from decades worth of primary sources, a unique look into the Chinese government's grand strategy and what its true foreign policy objectives mean for the United States.

For more than a century, no US adversary or coalition of adversaries--not Nazi Germany, Imperial Japan, or even the Soviet Union--has ever reached sixty percent of US GDP. China is the sole exception, and it is fast emerging into a global superpower that could rival, if not eclipse, the United States. What does China want, does it have a grand strategy to achieve it, and what should the United States do about it?

In The Long Game, Rush Doshi draws from a rich base of Chinese primary sources, including decades worth of party documents, leaked materials, memoirs by party leaders, as well as careful analysis of China's conduct, to provide a history of China's grand strategy since the end of the Cold War. Taking readers behind the Party's closed doors, he uncovers Beijing's long, methodical game to displace America from regional and global order through three sequential strategies of displacement. Doshi shows how China's strategy is profoundly shaped by key events that change its perception of American power--the end of the Cold War, the 2008 Global Financial Crisis, the populist elections of 2016, and the coronavirus pandemic of 2020. Doshi offers a comprehensive yet asymmetric plan for an effective US response to the China challenge. Ironically, his proposed approach takes a page from Beijing's strategic playbook to undermine China's ambitions and strengthen American order without competing dollar-for- dollar, ship-for-ship, or loan-for-loan.

A bold assessment of what the Chinese government's true foreign policy objectives are, The Long Game offers valuable insight to the most important rivalry in world politics.

Rush Doshi is the founding director of the Brookings China Strategy Initiative and a fellow in Brookings Foreign Policy. He is also a fellow (on leave) at Yale’s Paul Tsai China Center.

His research focuses on Chinese grand strategy as well as Indo-Pacific security issues. As director of the Brookings China Strategy Initiative, Doshi led an effort to acquire, digitize, and analyze Mandarin-language open sources and study Chinese behavior to understand the country’s grand strategy.  At the Paul Tsai China Center, Doshi managed a project that seeks to audit and improve U.S.-China crisis management mechanisms.

Doshi was currently special advisor to the CEO of the Asia Group and an adjunct senior fellow at the Center for a New American Security. Previously, Doshi was a member of the Asia policy working groups for the Biden and Clinton presidential campaigns, an analyst at the Long Term Strategy Group and Rock Creek Global Advisors, an Arthur Liman Fellow at the Department of State, and a Fulbright Fellow in China.

Doshi is the author of The Long Game: China’s Grand Strategy to Displace American Order (forthcoming from Oxford University Press, July 2021), and his research has appeared in The New York Times, The Wall Street Journal, The Washington Post, Foreign Affairs, International Organization, and The Washington Quarterly, among other publications. He has also testified before the Senate Commerce Committee and the U.S.-China Economic and Security Review Commission.

Doshi received his doctorate from Harvard University and his bachelor's from Princeton’s Woodrow Wilson School with a minor in East Asian Studies. He is proficient in Mandarin Chinese.