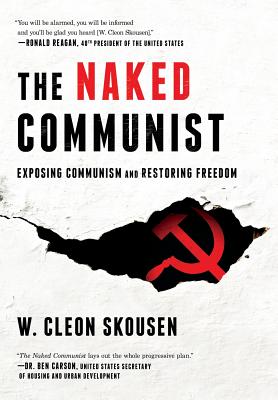 A timely update to the phenomenal national bestseller.

Soon after its quiet release during the height of the Red Scare in 1958, The Naked Communist: Exposing Communism and Restoring Freedom exploded in popularity, selling almost two million copies to date and finding its way into the libraries of the CIA, the FBI, the White House, and homes all across the United States. From the tragic falls of China, Korea, Russia, and the UN, to the fascinating histories of Alger Hiss, Whittaker Chambers, Elizabeth Bentley, and General MacArthur, The Naked Communist lays out the entire graphic story of communism, its past, present, and future.

After searching unsuccessfully for a concise literature on the communist threat, W. Cleon Skousen saw the urgent need for a comprehensive book that could guide the American conversation. So he distilled his FBI experience, decades of research, and more than one hundred communist books and treatises into one clarifying, readable volume that became a touchstone of American values and earned praise from the likes of President Ronald Reagan, Glenn Beck, and Ben Carson. Lauded by one reviewer as the most powerful book on communism since J. Edgar Hoover's Masters of Deceit, this text draws a detailed picture of the communist as he sees himself: stripped of propaganda and pretense. Readers gain a unique insight into the inner workings of communism--its appeal, its history, its basic and unchanging concepts, even its secret timetable of conquest.

Among the many questions The Naked Communist answers are:

* Who gave the United States' nuclear secrets to the Russians?

* How did the FBI fight communism after it was forced underground in 1918?

* Why did the West lose 600 million allies after World War II?

* What really happened in Korea?

* What is communism's great secret weapon?

* What can I do to stop communism?

* How can we fight communism without a major war?

Now updated for 2017, this edition includes a chapter on the forty-five Communist Goals, detailing how forty-four of those goals have been achieved in the U.S. already, as well as a chapter on the making of The Naked Communist, shedding light on how this book has sold almost two million copies. As relevant now as it was sixty years ago, Skousen's groundbreaking work provides a renewed understanding of one of the greatest threats facing America today.

W. Cleon Skousen was a world renowned teacher, lecturer and scholar for more than 60 years. Born in Raymond, Alberta, Canada on January 20, 1913, Dr. Skousen s growing up years were spent in Canada, Mexico, and California.

He attended college at the San Bernardino Junior College where he was elected Student Body President.

In 1934 he went to law school at George Washington University in Washington DC, where he earned his Juris Doctorate and was admitted to practice law in the District of Columbia. At this same time he was employed with the Federal Bureau of Investigation (FBI).

Dr. Cleon Skousen served the FBI for 16 years (1935-1951), and worked closely with J. Edgar Hoover including a hot-spot stint as the director of communications. In 1960 he began a speaking tour around the country addressing the important political issues facing America at that time. During this period, he averaged 300 speeches a year.

W. Cleon Skousen was invited to write a new constitution for Canada and the proposed United States of Latin America, and he published a model constitution that could be adopted by nations everywhere. He served as Chief of Police in Salt Lake City for four years and ten years as a university professor. He was a prolific writer and produced three national best sellers, The Naked Communist, The Naked Capitalist, and The Five Thousand Year Leap. Eight of his books were used as college texts, and several were translated and published in other countries. The Real Story of Christmas also sold over 500,000 copies.

W. Cleon Skousen seminars on the Constitution have been taught to several million across the U.S., and among his students were dozens of U.S. Senators and Representatives, two Supreme Court justices, and several candidates for President. He believed knowledge and understanding were key to maintaining a free country, and spent his entire adult life opening up complex issues for deeper understanding by students and audiences all around the world.

W. Cleon Skousen’s many books and recordings addressed diverse subjects ranging from the raising of boys, to the principles of good government, to prophetic history. Dr. Skousen accumulated a wealth of knowledge and optimism information that he called the diamond dust of exciting history, natural law and eternal principles of hope. These principles he painstakingly distilled into the pages of over 40 books and pamphlets, to be shared in an exciting and inspirational manner. This is what made him so popular with audiences of millions around the world.

Dr. Cleon Skousen and his wife, Jewel Pitcher of San Bernardino, California, are the parents of eight children, 50 grandchildren, and more than 120 great-grandchildren.