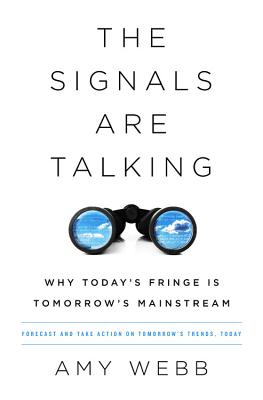 The Signals Are Talking: Why Today's Fringe Is Tomorrow's Mainstream

Amy Webb is a noted futurist who combines curiosity, skepticism, colorful storytelling, and deeply reported, real-world analysis in this essential book for understanding the future. The Signals Are Talking reveals a systemic way of evaluating new ideas bubbling up on the horizon-distinguishing what is a real trend from the merely trendy. This book helps us hear which signals are talking sense, and which are simply nonsense, so that we might know today what developments-especially those seemingly random ideas at the fringe as they converge and begin to move toward the mainstream-that have long-term consequence for tomorrow.

With the methodology developed in The Signals Are Talking, we learn how to think like a futurist and answer vitally important questions: How will a technology-like artificial intelligence, machine learning, self-driving cars, biohacking, bots, and the Internet of Things-affect us personally? How will it impact our businesses and workplaces? How will it eventually change the way we live, work, play, and think-and how should we prepare for it now?

Most importantly, Webb persuasively shows that the future isn't something that happens to us passively. Instead, she allows us to see ahead so that we may forecast what's to come-challenging us to create our own preferred futures.

The Signals Are Talking: Why Today's Fringe Is Tomorrow's Mainstream

Amy Webb advises CXOs of the world’s most-admired companies, three-star admirals and generals, and the senior leadership of central banks and intergovernmental organizations. Founder of the Future Today Institute, a leading foresight and strategy firm that helps leaders and their organizations prepare for complex futures, Amy Webb pioneered a data-driven, technology-led foresight methodology that is now used within hundreds of organizations. Forbes called Webb “one of the five women changing the world.”

She was honored as one of the BBC’s 100 Women of 2020 and was named to the prestigious Thinkers50 Radar list of the 30 management thinkers most likely to shape the future of how organizations are managed and led.

Webb is a professor of strategic foresight at New York University’s Stern School of Business, where she developed and teaches the MBA-level strategic foresight course with live case studies. She is a Visiting Fellow at Oxford University’s Säid School of Business, a Nonresident Senior Fellow in the Atlantic Council’s GeoTech Center, a Fellow in the United States-Japan Leadership Program and a Foresight Fellow in the U.S. Government Accountability Office Center for Strategic Foresight.

She was elected a life member of the Council on Foreign Relations. Webb is a former Visiting Nieman Fellow at Harvard University, where her research received a national Sigma Delta Chi award. She was also a Delegate on the former U.S.-Russia Bilateral Presidential Commission, where she worked on the future of technology, media and international diplomacy.

A lifelong science fiction fan, Amy Webb collaborates closely with Hollywood writers and producers on films, TV shows and commercials about science, technology and the future. Recent projects include The First, a sci-fi drama about the first humans to travel to Mars, an AT&T commercial featuring a fully-autonomous car directed by Oscar-winner Kathryn Bigelow, and an upcoming film based on Webb's hilarious and heart wrenching memoir about data, algorithms and online dating (Data, A Love Story). Webb is a member of the Academy of Television Arts & Sciences and has served as a Blue Ribbon Emmy award judge. "[Amy Webb] showed Comic-Con how it’s done” declared the Los Angeles Times, describing the 2019 main stage Westworld session she moderated with the show’s actors and showrunners.

Amy Webb is the best-selling author of several books, including The Genesis Machine: Our Quest to Rewrite Life in the Age of Synthetic Biology which will be published on February 15, 2022. Her previous book, The Big Nine: How The Tech Titans and Their Thinking Machines Could Warp Humanity (PublicAffairs/ Hachette 2019), was longlisted for the Financial Times & McKinsey Business Book of the Year award, shortlisted for the Thinkers50 Digital Thinking Award, won the 2020 Gold Axiom Medal and was named Amazon’s best book about technology for 2019.

The Big Nine is a sobering analysis of the present state of artificial intelligence, the conflict between the US and China, and what will happen to business and society during the next 50 years as AI evolves. A Washington Post bestseller, her earlier book The Signals Are Talking: Why Today’s Fringe Is Tomorrow’s Mainstream (PublicAffairs/ Hachette 2016) explains Amy’s strategic forecasting methodology and how any organization can identify risk and opportunity before disruption hits.

Signals won the 2017 Thinkers50 RADAR Award, the 2017 Gold Axiom Medal, and was selected as one of Fast Company’s Best Books of 2016. Her bestselling memoir Data, A Love Story (Penguin 2013) is about finding love via algorithms. Her TED talk about Data has been viewed more than 9 million times and translated into 32 languages. Data is being adapted as a feature film, which is currently in production. To date, her books have been translated into 19 different languages.

She attended the Jacobs School of Music to study classical clarinet and holds a B.A. in political science, game theory and economics from Indiana University and an M.S. from the Columbia University Graduate School of Journalism. She also earned Nikyu Certification in the Japanese government-administered Language Proficiency Test. In addition, she earned the rank of Shodan (first-degree black belt) in Aikido, but a serious accident during training a few years ago forced her to retire. She lives in Baltimore and in New York City. 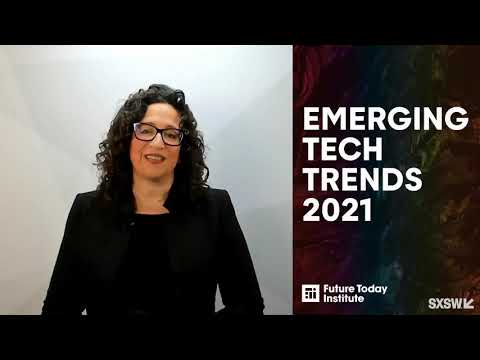