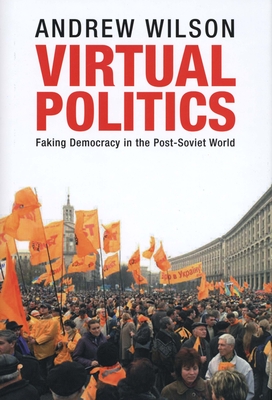 States such as Russia and Ukraine may not have gone back to totalitarianism or the traditional authoritarian formula of stuffing the ballot box. But a whole industry of 'political technology' has developed instead, with shadowy private firms and government 'fixers' on lucrative contracts dedicated to the black arts of organising electoral success.

This book uncovers the sophisticated techniques of the 'virtual' political system used to legitimise post-Soviet regimes: entire fake parties, phantom political rivals and 'scarecrow' opponents. And it exposes the paramount role of the mass media in projecting these creations and in falsifying the entire political process.

Wilson argues that it is not primarily economic problems that have made it so difficult to develop meaningful democracy in the former Soviet world. Although the West has seen its 'spin doctors', dirty tricks and aggressive ad campaigns, it is the unique post-Bolshevik culture of 'political technology' that is the main obstacle to better governance in the region, to real popular participation in public affairs and to the modernisation of the political economy in the longer term.

Andrew Wilson is a senior policy fellow at the European Council on Foreign Relations. His topics of focus include Ukraine, comparative politics of democratisation in the post-Soviet states, and political technology

Wilson is Professor in Ukrainian Studies at University College London. His book Ukraine Crisis: What the West Needs to Know was published by Yale in October 2014 in the UK and in November in the USA.

He has worked extensively on the comparative politics of the post-Soviet states since 1990. His other books include Belarus: The Last European Dictatorship (2011), The Ukrainians: Unexpected Nation (Third edition, 2009), Ukraine’s Orange Revolution (2005) and Virtual Politics: Faking Democracy in the Post-Soviet World  (2005).