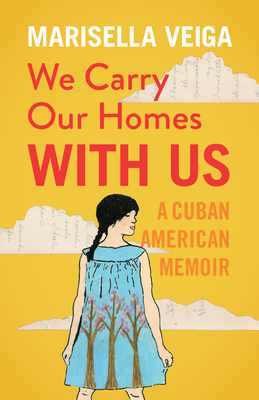 We Carry Our Homes with Us: A Cuban American Memoir

On December 30, 1960, Marisella Veiga with her mother and two brothers boarded a plane from Havana to Miami. Her father fled a few months later, joining his family with a total of fourteen U.S. cents in his pocket and an understanding that he would never see his homeland again. Seeking a less competitive job market and thanks largely to the sponsorship of a host family in St. Paul, the Veigas resettled in Minnesota, miles away from the Caribbean subtropics, where the climate was similar to home, Spanish was spoken, and thousands of exiles arrived each month.

Veiga's stories are rich with detail and character as she describes her integration into a northern midwestern landscape she grew to love, from adapting to the cold--learning to ice-skate before learning to speak English--to her obsession with Davy Jones. Yet, the weight of her biculturalism--being of two worlds but an outsider to both--has been central to her quest for identity: Sometimes, I dream that if I can get in touch with the essence of that monolingual child with one set of customs, I would be satisfied. I would be complete, whole. In this honest memoir, readers will find a resonant story of an exile's journey, one that ultimately embraces those two worlds: a life of conflict and limbo but also one of richness and understanding.
We Carry Our Homes with Us: A Cuban American Memoir

Marisella Veiga writes in various genres and teaches writing as well as Cuban home cooking.  Her first book is We Carry Our Homes with Us:  a Cuban American Memoir (Minnesota Historical Society Press 2016).  Other nonfiction includes Cuban Rice Classics (Rubber Tree Press), her work as a syndicated columnist for Hispanic Link News Service, and more than 150 articles in commercial magazines and newspapers, including the Washington Post, Art In America, Poets&Writers.  She was awarded an Evelyn LaPierre Award in Journalism for a feature story.

Her short fiction has been widely anthologized, most recently in Sudden Fiction Latino:  Short Short Stories from the United States and Latin America.  She won a Canute J. Brodhurst Prize for best short story and a Special Mention in Fiction by the Pushcart Prize:  Best of the Small Presses.  Her poetry has appeared in more than 15 literary magazines.

Veiga has worked as a literary and commercial translator, bringing Spanish language writings into American English.  In addition, Veiga has written an encyclopedia entry on Cuban food in America.  She was featured as a traditional home cook at the Florida Folk Festival in 2015 and teaches children and adults at various cultural and community centers.